The 2017 Irish Nationals were held on 19th-21st August at Ballyholme Yacht Club. 29 boats competed which included one visiting team from the UK – John Hayes, an ex 470 campaigner from Southport who was sailing with Joel James. Overall numbers were down a bit on previous years due to a number of mitigating factors. However those unable to attend missed a superb event with a wide range of conditions, superb race management, excellent hospitality and exceptionally close racing.

Chief measurer Jimmy McKee was in attendance on Friday night & Saturday morning to scrutineer and weigh boats. The forecast for Saturday was borderline and the fleet were held ashore initially for an hour or so to allow the wind to subside. When the fleet did eventually take to the water, the lull in conditions proved to be only temporary. Shortly after the start of race one, the committee boat began recording gusts of 30 knots. The ensuing white knuckle race saw Shane MacCarthy & Damian Bracken winning from Sligo’s Niall Henry & Ossian Geraghty with Sutton sailors Alan Blay & David Johnston 3rd. With only 15 boats finishing and conditions refusing to abate, the race committee made the sensible decision to send the fleet home after a single race.  Once ashore competitors enjoyed a superb bar-b-que where the famous Ballyholme rib-eye steaks lived up to all of the pre-event hype.

The forecast for the second day of racing could not have been more different to the first. This time, conditions looked borderline on the light side, with even the most optimistic forecasts predicting gusts of just 7 knots. Nevertheless, with a race to make up the race committee sent the fleet out and after a hour or so floating  around the breeze did eventually appear. Niall & Ossain took first blood in the challenging conditions winning the opening race from English visitors John Hayes & Joel James.  The right hand side of the beats seemed to be consistently paying in the ebbing tide but getting out there through the various holes & shifts was’t completely straightforward!  Ger Owens & Melanie Morris found a way though, knocking in 2 bullets in race 3 and 4 from Alan Blay & David Johnsson and Keith Louden & Alan Thompson respectively.  Silver fleet sailors Doire Shiels & Andrew Sexton also had a good day, recording a 7th and a 3rd to take control of the silver fleet. After a long day on the water, the race committee decided the fleet had had enough after 3 races and the fleet returned home.

The Irish GP14 AGM was held on Sunday evening and saw Stephen Boyle step down after 3 years as class president. David Cooke takes over as the new president and no doubt will strive to continue the excellent progress made over the past few years as the class builds towards a 2020 World Championships in his home club. Following the AGM, many of the sailors gathered in the nearby Jamaica Inn with a surprise birthday cake for class stalwart Hugh Gill who is celebrating another  big one!

With 3 races scheduled for the final days sailing, and just 2 points separating the top four boats the championship was wide open. Race 5 saw Shane & Damien record their second race win from John & Joel. Race 6 and another race winner, this time John & Joel taking line honours with Keith Louden & Alan Thompson in second position.  So going into the final race the championship was set for one of the closest finishes in recent years with Ger & Mel holding a narrow one point lead but Shane & Damian, John & Joel and Nial & Ossian all still in with a real chance of overall victory.

In the end however, Ger & Mel held their nerve and won the last race and with it, the overall event. Doire Shiels & Andrew Sexton won the Silver fleet finishing in 10th overall while Sutton’s Shane MacLoughlin & Rory Murdoch won the bronze fleet. Top youths were Gareth & Richard Gallagher in 12th position overall.

Thanks to our OOD Robin Gray and his team for exceptional race management,  David Fletcher for all his hard work in organising the event and everyone at Ballyholme Yacht Club who contributed to such an enjoyable championship. 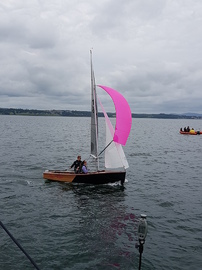 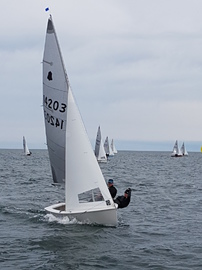