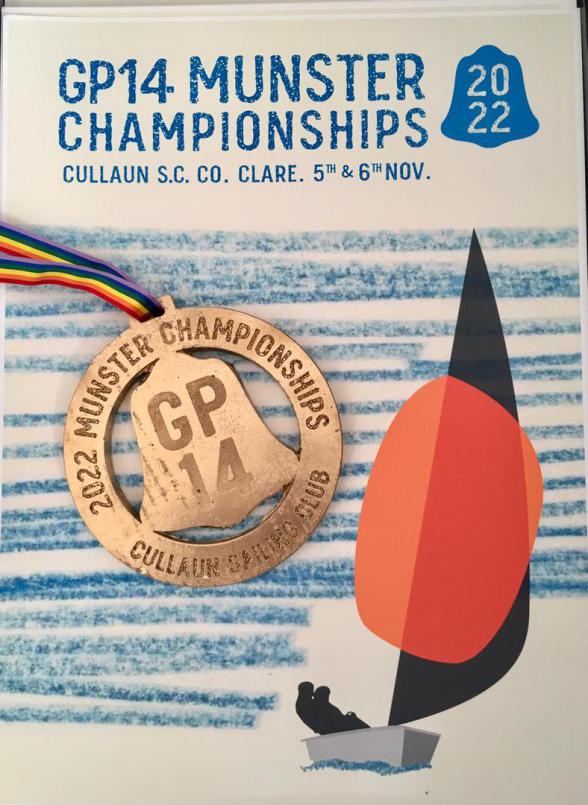 I have to believe that everyone committed going to the Munsters in Callaun in November was expecting to be blown off the water in fierce gale gusts and sleet after our taster last year not to mention frost bitten fingers, toes & noses. But instead, it turned out be possibly the most civilised weather event of 2022 as promised by the world renowned Cullaun News in the weeks prior.

Having been warmly welcomed by club members on Friday night it was very obvious that huge amounts of work had gone into making room for us, it was also lovely to a flotilla of swans floating asleep with their heads under wings at first light on Saturday with clear blue skies and gentle zephyrs on the lake surface.

That’s how Saturday continued with both crew on the side-decks at times as it was much more about finding the pressure and luffing on the lifts or tacking on the headers than physical powers that ruled the ripples. This made racing very tactical and interesting for all levels as bronze, silver, youths and OAPs mixed it up all around the course throwing up some great moments and results for everyone.

Having remarked about the big starboard biases in Cullaun last year, I was again floored by the big biases in all 4 races on Saturday, this time to port end. However, the puzzle of the beat shifts gave even late starters opportunities to climb back, and no one handled the starts and shifts better than Coleman and John who recorded 4 firsts but eventually lost one to OCS.

Enjoying the shifts, Alan & I managed some good results through huge concentration of shifts and pressure chasing on beats and sail trimming offwind, to be hard chased by Rob & Steven, Steven & Daniel, Conor & Adam, Sam & Josh, Ger & Hugh who all recorded at least a top 4. Youth and bronze were really mixing it with Gold & Old.

On Sunday although the sun didn’t appear often, the wind having shifted a bit south which gave us an interesting reach through reed patches, only ever squalled to above force 4 momentarily twice I think. The OD having sussed the settings we got 2 more great shifty races leaving most of us very happy there wasn’t a third race thanks to a big cloud darkening the water and 20+ knots squall hastened the second half of the fleet to the line.

It was a case of pass the batton (or tiller) weekend or perhaps a “move over dad” weekend as Coleman who first appeared on the GP circuit crewing for his dad was greeted by his dad as he came ashore. There were also a lot of threes (3s).

19 boats of from all over Ireland gathered at Cullaun Co. Clare over the weekend of 5-6th Novemberfor, for the last event of the busy year that was 2022 with the GP14 Munster Championship at stake.  A super turn out of crews from all generations and family combinations from Cullaun, Skerries, Sutton, Tralee, Newtownards, Sligo, Greystones, and Blessington. Unlike last year’s Baltic weather at similar event in late autumn, the weather this time was very pleasant, warm, and mild, so much so that there were no reported capsizes or troublesome abandonments.

First race start involved a general recall which put manners on everyone and was won by Skerries Coleman Grimes/John Chambers (back to GP14 sailing after a long sabbatical) closely followed by Greystones Norman Lee and Alan Leddy with Steven and Daniel Nelson from Newtownards grabbing third.
While line honours went to Grimes and Chambers for the second race, there was a reported OCS (although pen-rumours later mentioned experimental use of foils), the second race went to the Lee-Alan pairing with Conor Galligan (new to GP14 fleet) and Adam Leddy youths snatching 2nd from Rob Lee and Steven Lynch in their new boats.

In very shifty conditions, by sometimes over 40 degrees in gusts, and with an infinite number of tacks needed per windward leg the third race went to the Grimes and Chambers team by a country mile with second place going to a resurgent Rob Lee and Steven Lynch followed by Steven and Daniel Nelson just pipping the Galligan and Leddy youth boat.

In mild conditions on the Saturday before a forecasted blow out for Sunday, the race officers ran an extra 4th race which again went to the Colman and John team with second bell going to Steven and Daniel Nelson beating Rob Lee/Steven Lynch into third.
Overnight the Grimes/Chambers boat was ahead of Norman Lee/Alan Leddy on joint 2nd with the Nelson father & son pairing and Rob Lee/Steven Lynch squads. Discussions in the winners’ enclosures back in Gallaghers bar after dinner focused on potential inappropriate but innovative use of foils. This most certainly had something to do with the return of John Chambers to the fleet!

Fortunately, the impending bad weather held off just long enough for the race officer to run 2 snappy races on Sunday morning with a nice long square line. There was some carnage at the first windward mark with port tacking approaches by the Grimes/Chambers and Norman Lee/Alan Leddy  boats being shut out by the long line of conservative starboard tackers. After a quiet first day Katie Dwyer/Laura Fitzpatrick then led for the first time before a rounding incident meant turns and the pair dropping back out of contention.

This allowed the Rob Lee/Steven Lynch  crew to take the first race by a massive lead ahead of Grimes/Chambers  in 2nd with Steven and Daniel Nelson grabbing 3rd just ahead of the emerging talents of the Sam Street and Josh Lloyd youth combination from Blessington.
The last race of the event in light conditions before a downpour was a tight shoot-out between the Grimes/Chambers boat versus the Norman Lee/Alan Leddy combination all the way to the finish line with the Greystones seniors just holdoff to snatch the win. A very strong 3rd place was snatched by the leading female boat of Katie Dwyer/Laura Fitzpatrick from Sutton.

There were some great family rivalries throughout the event with family members competing across all fleets. Rob Lee showed his old man how to do it in the gold fleet with Sam Street in the silver and Denis Cully and Daithi and Aaron Murphy in the bronze, doing the same.
Denis Cully set the Bronze fleet pace with Ossian Geraghty crewing for him by running away with the first place. Max Cully/Tadgh Wardell started the event tied with Des and Pat (Cullaun) and Jennifer and Lara (Newtownards) for second overall for the season Bronze League but there was no stopping them and they held on to second in the bronze fleet with relative ease and much singing (although their rendition of never going to give you up may have been a tactical manoeuvre to scare others away from them). This secured them a second place for the season also.

There was some great competition between Galligan/Leddy and Street/Lloyd for silver fleet honours but the boys in their new boat held on (obviously the thought of a coveted special fifth place overall prize spurred them on).

Special thanks for the tremendous hospitality to all Cullaun members, families and friends for the accommodation, food, chauffeuring, security, rescue and of course our race officers David Vinnell and Aoife Lyons

Entries are ONLINE with a link ABOVE to Cullaun Sailing Club website. There is camping and motorhome parking available for the Friday and Saturday nights on request. There is a meal available on the Saturday night, cost £15 a head.

See Bottom of this Page

Your form message has been successfully sent.

You have entered the following data:

Click here to check out the Latest GP14 News from Afloat

Email GP14 news and notices to Andy on info@gp14ireland.com to get them posted here