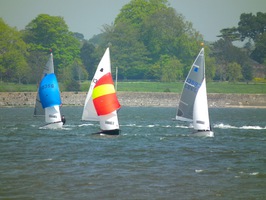 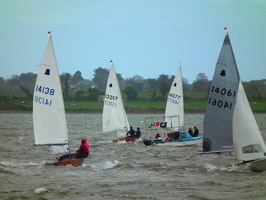 The first Irish GP14 event of the 2014 season was the Riocard O’ Tiarnaigh Challenge held at Swords Sailing Club on the 26th and 27th April. The event is unique in the GP14 calendar with the bronze, silver and gold fleets starting separately. Each fleet takes part in up to nine qualifying races spread over Saturday afternoon and Sunday morning. Following the Qualifying races, the top four boats from each fleet then compete against each other in the Finals, which consist of three races. With the scores from all previous racing now irrelevant, it would all be to play for.

A blustery first day greeted the 21 boats. Racing started a bit later than planned but Race Officer Peter Smyth managed to get 4 races in. The strong winds were unforgiving and there were several early season teething problems for some of the boats, with the number of starters in each consecutive race gradually reducing to 11 in the final race of the day. With a variety of courses laid out, racing was a challenge, particularly identifying the correct pipe buoy to be rounded. The blustery conditions were challenging with many boats across the fleets displaying the telltale mud stains on the mast tip and boom as a result of a capsize in the shallow water of the estuary.

Saturday ended with many early season aches and pains, bumps and bruises and the fleet looking forward to the forecasted lighter winds on Sunday....

On Sunday morning the early starters were greeted with almost identical conditions to Saturday, however, by the time racing started the wind had dropped enough to entice even the most reluctant competitors back onto the water.

The Race Officer and his team did a sterling job to fit in 4 races before lunch. Racing was enjoyable and speaking on behalf of the Silver fleet, there was good banter between the boats and every race was nip and tuck with three of the races being decided on the last tack. On one occasion a spinnaker pole was even held to ransom after being thrown overboard by Simon and Richard, it was eventually handed back half way down the reaching leg.

A quick lunch break ashore and the results were tallied up from the Qualifying racing. The 12 finalists were identified:

The 12 finalists rigged up and headed out for the three Final races. Race Officer Peter Smyth set a windward/leeward course.

The first race kicked off with the Silver fleet sailors obviously having something to prove, Simon Cully & Richard Street in their brand new Duffin boat battled it out with Shane MacCarthy & Damian Bracken, but Shane and Damian got the upper hand and finished first, Simon & Richard came in second with Graeme & Rebecca Farrington managing to get third place.

The final race was worth double points, so a good finish was critical. However, so too was a good start! A recall was signalled but most of the fleet sailed on regardless. For some of the competitors, the results of the third and final race were unknown until the results sheet came out. With 3 of the gold fleet boats being over at the start, the final finishing positions for the last race were Simon Cully & Richard Street finishing first, Shane MacCarthy & Damien Bracken coming in second and much to their surprise Graeme & Rebecca Farrington finishing third.

Above Youtube Video from Emmet Dalton of Howth Yacht Club 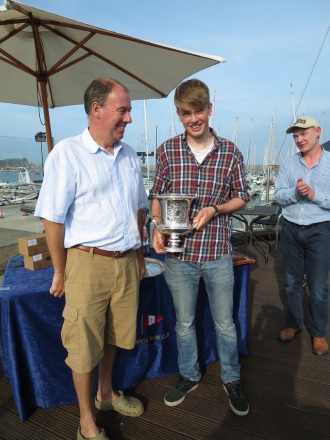 Eanna Maloney-Lawless from Sutton Dinghy Club took the GP14 Irish Youth Championship title in Howth.  It was a hard fought battle with fellow Sutton helm Dan Gill which went down to the wire on the last race.

The youth sailors, kindly ferried out to the racing area by Neville & Jean Maguire, waited eagerly as the seniors finished off their second race in gentle winds. With the changeovers complete, PRO Harry Gallagher quickly fired the five minute gun. The youthful enthusiasm of the sailors proved too much with two general recalls but finally got going, third time lucky. Two Sutton sailors, Callum Maher & Shane Mcloughlin miscalculating the race officer's signals and starting on the one minute gun provided the fleet with some humour as they continued towards the windward mark laughing amongst themselves.

With Eanna Maloney Lawless & Stephen Boyle rounding the windward mark first, the positions seemed set for the race with little place changing occurring around the racecourse. However the fleet battled it out on the upwind legs and the race finished up with Eanna & Stephen taking the bullet, Dan & Hugh Gill in second place and Gareth Gallagher & Donal McGuinness from Lough Foyle YC biting at their heels in third. By the time everyone had finished, the wind had dropped off and it seemed pointless to try and fit in another with stronger winds scheduled for Sunday.

Sunday began with sunshine and smiles all around as the forecast for stronger winds was correct. Racing kicked off with the first gun at 10:30. Strong winds and big swell provide the sailors with a difficult task navigating the race course with an extremely tight reach to the gybe mark and nice surf to the leeward mark with Dan & Hugh chasing the leaders Eanna & Stephen around the course but couldn't find the extra speed to catch them. Further back in the fleet they continued to fight it out until Edward Coyle & Colman Grimes of Skerries SC broke clear to take third. The last two races were fought hard by all in a strong breeze, no letting up with fierce competition on the points leader board. Gareth & Donal won race 3 from Edward & Colman with Callum Maher & Shane McLoughlin from Sutton pitching up in third place.

It all came down to the final race with Eanna, Dan, Gareth and Edward all possible winners. After a clean start Dan & Hugh rounded the weather mark followed closely by Eanna & Stephen. A tight top 3-sail reach saw Eanna pulling out over Dan and opening up yards as they powered into the gybe. Therein the battle for the Championship lay with Dan doing his best to catch the very quick Eanna providing the spectators on the committee boat and the waiting senior sailors with great excitement. At the last leeward mark Dan & Hugh secured inside position and held on to take the race win. Eanna however with 2 firsts and a second won the coveted GP14 Youth Championship of Ireland for the second year in a row. David Johnston & Alan Blay, also from Sutton, led the rest of the fleet home in third place. Many thanks to everyone who willingly gave their boats to the young sailors who happily returned them all without needing the wizardry of Alistair Duffin to put things right. 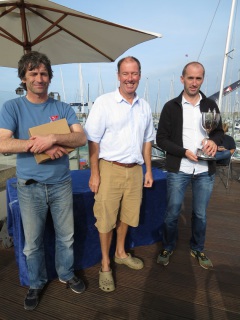 The event was run alongside the GP14 Autumn Open.  Niall Henry & Ossian Geraghty from Sligo took the championship on the last day with 2 race wins but again it was a tight finish on the final leg of last race to runners up Shane McCarthy & Damien Bracken Greystones/Skerries.

PRO Harry Gallagher & team organized both fleets on the water  & an impressive race turn around with 5 races on the Sunday.

Thanks to Howth Yacht Club for providing a great location and summer weather!

More photos on the gallery. 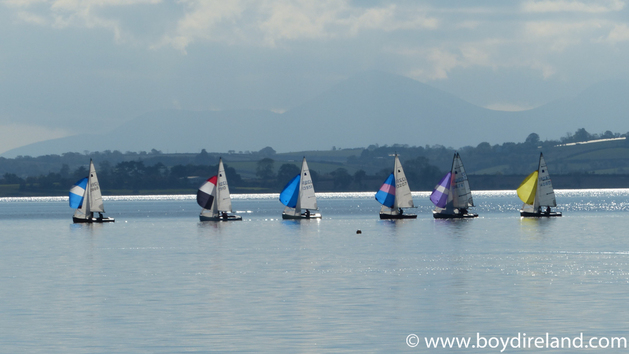 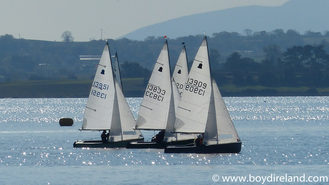 The Hot Toddy 2014 has been won by Ruan O'Tiarnaigh & Mel Morris.

The forecast seemed promising with warm weather and some wind, and although the autumn warmth was there Newtownards sheltered  position surrounded by low hills meant wind was minimal and a race officers nightmare. The nice little breeze present while rigging disappeared but eventually a light westerly appeared and racing got under way in 3 -4 knots of wind round about 1.00 pm. 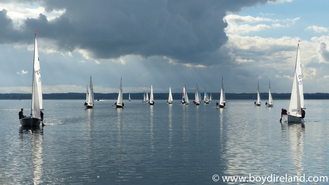 With a little more breeze on the left side of the track boats coming in on port to the first mark did best with Dan and Hugh Gill and Ruan O’Tiarnaigh (standing in for the injured Ger Owens) With Melanie Morris rounded in the top positions, holding these for the next round. With the breeze slowly falling by the time boats started the run it was clearly going to be a long and difficult leg. The two leaders chose to gybe with the rest of the fleet sticking to starboard gybe and making better headway. Heading for the leeward mark Paddy O’Connor and Brendan Brogan seemed to have the lead, but J P McCaldin with Liz Copland and Alistair Duffin with Brendan McGrenagham rounding around 10th place sailed high to the area where the breeze was strongest on the beat and found enough extra wind to bring them into the leeward mark in first and second place. With the race being shortened at the leeward mark these became the finishing positions. 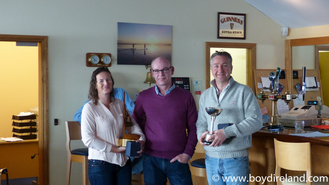 With little wind troubling the surface of the water nearly half the boats chose to take a break ashore, but most of them found they were unable to get back to the starting line when enough breeze appeared mid afternoon to start a second race. Fourteen boats made the start and were joined by J P who had made great efforts to get to the line from the shore. Again the breeze was best on the left and Keith Louden with Alan Thompson made a fast start and found the right way to the first mark followed by Ruan and Mel. With tighter reaches there was less opportunity for place changing. Ruan and Mel mounted a challenge on the second beat and were looking forward to the run when they realised the race was to be finished at the windward mark - a good decision with the wind falling again. Curly Morris with Laura McFarland held third with Katie Dwyer with Michelle Riley in fourth. the next boats coming up to the line received a shock when two boats suddenly appeared from the previously unfavoured right- Brenda Preston sailing with John McRobert and Newenham de Cogan with Andy Corkhill slipping into fifth and seventh positions.

On Sunday the early morning breeze again died but with a ripple appearing the fleet sailed slowly out to the race area for a start after midday for what was probably the calmest race of the weekend. Katie and Michelle with a great start got to the windward mark ahead of Dan and Hugh and held them off during the two downwind legs. With the wind again falling the beat was very difficult Katie and Dan going up the middle found a big “hole” in the wind. Boats on the left did better with Ruan and Mel just managing to hold off a challenge from boats further to the left with Alistair and J P taking second and third. Alistair’s performance was particularly note worthy - he collected a very expensive 720 at the gybe mark and then capsized on the last beat overdoing a roll tack! A memorable and entertaining end to a challenging but pleasant weekend.

More from Boyd Ireland on the gallery page. 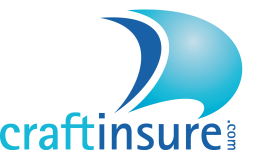 The GP14 class runs one of the premier leagues of dinghy sailing in Ireland with sailors competing in Gold, Silver and Bronze fleets across a series of events throughout the season.

The GP14 Association of Ireland President Stephen Boyle would like to thank CraftInsure for sponsoring the GP14 Irish Leagues 2014.

The prizes of free Insurance vouchers were presented to the winners of the Gold, Silver and Bronze leagues at the final event of the Hot Toddy with the points accumulating from the first event held in April. 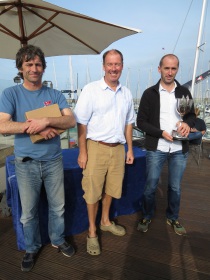