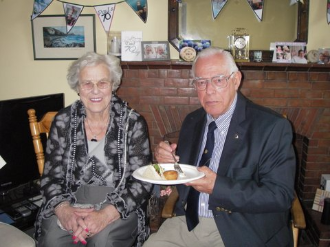 The GP14 Class was saddened to hear of the recent passing of Joe Martin Hon. Treasurer and Secretary of the Irish Association between 1988 and 2001.

Joe first got involved with the GP14 class when he purchased ‘Vol-e-vent’ for son Paul and friend David Mc Williams in the 1970’s helping Paul to strip and repaint the boat from bare timbers.

As Paul had no car at the time, Joe and his wife Joan would accompany the boys to GP events, firstly towing the boat to all Irish events and over time accompanying the Paul to the GP14 Worlds in Troon 1979 and the Cape May 1983 Worlds in the US. It was while attending the Irish Events that Joan first met Rosemary Rowan and soon a great friendship developed between the Martins and the Rowans which continued long after their involvement with GP14’s. When Paul upgraded to ‘Free Energy’ in the 80’s Joe identified the ideal spot for winter storage as the CIE Bus Garage where he worked. Over time many of Joe’s colleagues  in the depot became involved in the maintenance of Free Energy and tothis day the GP14 holds a sentimental part in his colleagues hearts.

After sailing with Paul Rowan in Cobh and son Paul emigrating to Australia in the 80’s Joe got involved with the Irish Association at the request of Peter Hannon of Blessington Sailing Club. It was the start of a long and distinguished period serving on the Irish Association Committee. From 1988 to 1997 Joe held the positions of Hon. Treasurer and Hon. Secretary simultaneously, retaining the position of Treasurer from 1997 to 2001 and thus helping to build the Irish fleet through its peak period.  Joe had a reputation as a fantastic administrator and would arrive to all the events with his big black book for tracking the race winners and trophies. Pouncing immediately after the prize giving, the lucky winner had to sign immediately for the awarded trophies and woe betide anyone who forgot to bring their trophies back the following year! A quick look at the details in the Handbooks during this period will show that every competitors name is diligently recorded along with name of the association trophy they won.

Daughter Anne had been a GP crew for many years and when Paul emigrated to Australia she took the helm of Free Energy campaigning the boat on the circuit and enjoying many hours on Dublin bay with Joe during his retirement.

From son-in-law and GP14 sailor Will Moody:  “I met Joe in 1988 at a GP14 committee meeting in Crewe. It was not until 1997 I met my wife Anne, Joe kept her a secret.  I am sure there are many within the GP14 fleet who will miss his wise words and incredible intellect.”

Sadly, Joan passed away in 2015 while Joe was battling his illness.

Camping is plentiful and available on a drained, level and cut site! Many GP14s will remember their visit to EDYC for the 2014 GP14 Worlds.

Plus entertainment from the group - The Folkin Eejits

From the “Full Ulster Fry” to lesser combinations of the breakfast fare in the clubhouse.

Also on site will be welcoming our Drascombe Event community – who will be touring/cruising the lough in their unique classic craft. 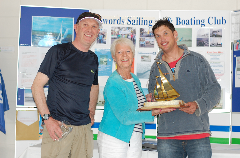 The domestic season finally got underway a little later than ususal this weekend with many of the fleet waiting for boats to arrive back from Barbados after the 2016 World Championships in early April.

Without wanting to lose an event, the Class decided to utilise the Purcell Trophy, raced on Saturday as part of the qualifier for that unique event the Riocaird O'Tiarnaigh Trophy which concluded Sunday. Thanks to organiser and PRO Peter Smyth and his crew in Swords Sailing and Boating Club they pulled it off despite the tropical sunshine mingled and sprinkled with tropical downpours. Yes, One weekend, 2 events. Back on track.

The winners of the Purcell Trophy on Saturday were Shane MacCarthy and Damian Bracken (Greystones SC) from Keith Louden and Alan Thompson (Sligo YC) in 2nd and John and Donal McGuinness (Moville) in 3rd.

The O'Tiarnaigh Trophy concluded with the 3 race final that included top boats from bronze, silver and the gold fleets. At the end of some great racing Shane MacCarthy and Damian Bracken took 1st. Despite being tied on points, Katie Dwyer and Michelle Rowley took 2nd ahead of Keith Louden and Alan Thompson on the basis of a race win the 3 race finale. It was also great to have Muriel O'Tiarnaigh on hand to present the trophies.

A big thank you to all in Swords Sailing and Boating Club for their great efforts in accomodating both events. Full results, photos and race report to follow.

In addition Stephen Boyle, President of the GP14 Class Association of Ireland made a special presentation to Shane MacCarthy to mark his recent victory at the GP14 World Championships in Barbados.

The Irish GP 14 fleet returned to domestic competition at the weekend after a very enjoyable World Championship in Barbados over Easter, made all the more enjoyable when we had an Irish winner in Shane McCarthy & Andy Davis.

The Purcell Championship hosted by Swords sailing club on Saturday 21st was sailed over four races. The first race saw our newly crowned world champion first at the weather mark and remained there for the rest of the race. With Keith Louden & Alan Thompson taking second and Hugh Gill with his new boat and new crew Simon Revill beginning to find some form in third.

Race 2 saw Shane & Damian round the weather mark in first followed closely by John & Donal McGuinness in second and Keith & Alan in third. On the second beat the wind shifted to right favouring the McGuinness brothers who were first to the weather mark and held it all the way to the finish. Shane & Damian took second followed by Keith & Alan in third.

Race 3 started with significantly less breeze than the morning races and saw the McGuinness Bros get to the weather mark first followed by Shane & Damian. With the breeze slowly dying the world champion showed his superior speed in light airs and passed John & Donal to leeward on the second reach and held the position to the finish. The McGuinness brothers were second with Richard Street & Simon Dickson in third.

Race 4 was sailed in a light-shifting breeze. Curley Morris & Laura McFarland lead at the weather mark with Richard Street & Simon Dickson in second followed by Shane & Damian. At the end of the of the first lap Keith & Alan were at the back end of the fleet but an inspired tack to the left at the start of the second beat paid dividend and put them in the top four at the weather mark. Next time around at the weather mark they had got themselves into second just behind Richard & Simon. With the race shortened and one leg to go it was a drag race to the finish with Keith & Alan coming out on top and finishing first with Curly & Laura in Second and Richard & Simon in third.

Shane & Damian retained the Purcell Championship with two first and a second. Keith & Alan’s dramatic comeback in the last race was enough to wrestle second place from John & Donal who finished third overall.

Thanks again to the event organisers and members at Swords Sailing and Boating Club for providing a warm welcome and great racing.

The Riocard O'Tiarnaigh Challenge was again this year held at Swords Sailing and Boating Club on Saturday 21st and Sunday 22nd of May. It was sailed as a combined event with the Purcell Trophy this year due to the 2016 World championships being held in Barbados at Easter. A warm welcome was given by the club to all competitors and their friendship and hospitality was extended thought the weekend, with their incredible race management on the water and their fantastic catering ashore.

The results of the Purcell trophy were rolled over from the Saturday and used partly as qualifying for the Riocard O'Tiarnaigh Challenge final. A total of 7 races would be sailed for qualifying purposes with one discard to be used. After the Purcell event results were counted three shorter races with separate fleet starts were scheduled to be sailed on the Sunday morning.

In the first two races on the Sunday morning in the gold fleet Keith Louden and Alan Thompson took two race wins and Shane McCarthy & Damian Bracken took two second places. John & Donal McGuinness qualified in third place, this left the last place open and to be contested in the final race by three boats. Niall Henry and Ossian Geraghty took the race win and with other results going their way, they grabbed the final place. However they would later choose not to contest the final and pass on the final slot to Hugh Gill and Simon Revill.

The Silver fleet was just as hotly contested with the final places being decided in the final race of qualifying with Michael Cox and Josh Porter, Simon Jeffery and Alan Henry, Katie Dwyer and Michelle Rowley and Simon Cully and Richard Street all making it through.

The bronze fleet sailors Ian Nish and his crew Des, and Keith and Barbara Leonard who had already qualified, went out on Sunday morning to test out the conditions and get some practice in preparation for the final.

At lunch time the wind died away completely but when PRO Peter Smyth blew his whistle to signal end to lunch the wind duly obliged and within half an hour it had settled in to a steady force 3 in strength. However it was still shifting back and forth in direction, as it had done all weekend in preparation for the final.

The first race saw a great start by Katie Dwyer & Michelle Rowley and when they rounded the windward mark with a sizeable lead they could not be caught by Shane McCarthy & Damian Bracken, a result which would prove significant for the girls by the end of the day. John & Donal McGuinness crossed the line in third place.

Second race saw Shane McCarthy and Damian Bracken take an early lead which they would maintain to the end and with positions changing behind them Keith Louden & Alan Thompson took second and John & Donal McGuinness were third.

Barbados boats are back!

Saturday 21 May 2016  (Purcell Trophy)
Four Races    First Race 12.00noon
Lunches ashore, there will be a briefing before going afloat

Sunday 22 May 2016 (R O'Tiarnaigh Challenge)
Two/Three Races    First Race 10.30.
Lunches ashore, there will be a briefing before going afloat
The Finals will as soon as possible after the selection of the 12 Finalist 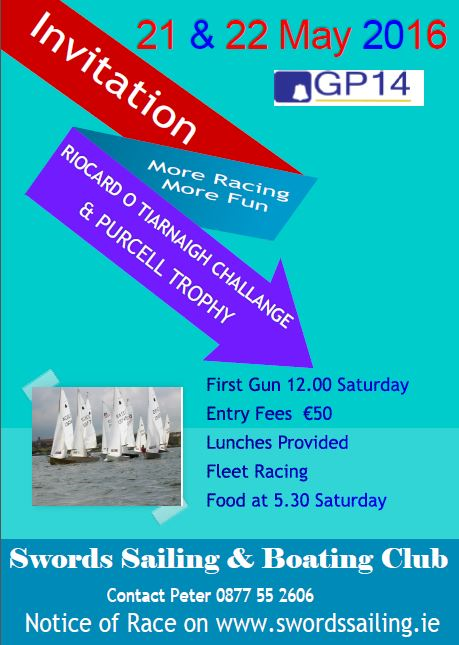 Coaching for Silver & Bronze fleet sailors to be given by Stephen Boyle and John Malone.

Bring your own lunches/snacks. Accommodation list available on www.msail.net. All participants are invited to join in Mullingar Sailing Club racing commencing at 3.00pm on Sunday.

If you want to do just one day only - Saturday or  Sunday please get in touch with Michael. 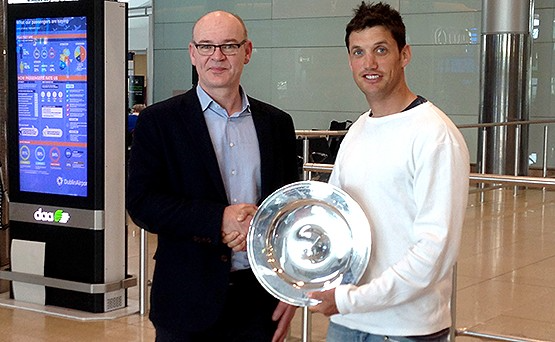