(Will be held on Zoom)

A short update from the GP14 Ireland Committee. Despite having only managed to run one event this year, the Committee have met on a regular basis throughout the season and have been in regular contact with the International Committee as well. Our most recent meeting was to confirm the decision NOT to run the GP14 World Championship in Ireland in 2021 but to defer till July 2022.

While we hope season 2021 will be back to normal both here and in the UK, the Worlds Organising Committee in Skerries as well as both the International and Ireland Committees felt that it might be too early to expect 120+ sailors and their familiies to commit and organise to travel to Skerries in 2021. Better to allow the fleets get back to normal in 2021, get some racing under their belts and have a well attended event in 2020. The exact dates for the 2022 Worlds will be confirmed in due course by Skerries.

The Committee plan to hold the Class AGM on January 20th 2021. WIth the 2020 season truncated, the formal aspects of the AGM will be kept to a minimum but we would like to use the opportunity to catch up with the membership and discuss and share ideas for the Class going forward.

The Committee have also drafted a provisional calendar for 2021 (see on left of the Home screen) and are also working on ideas and options for the 2022 event calendar. The Committee would welcome members thoughts and ideas on events and locations at this point. Feel free to email me using email below.

The Committee will issue a short survey to gauge areas of interest or concern that we can also include at the Jan 20th meeting.

We believe that there may be some World Sailing news around prize categories for World Championships that will be of interest to the GP14 fleet in the lead up to Skerries 2022. We hope to be able to expand on this at the AGM. As an added incentive to join the AGM, the Committee will run a draw for the chance to win free entry for the 2021 GP14 Championship of Ireland. All registered attendees of the AGM will be entered in the draw.

The Committee next year will have some new faces so we would welcome a good turnout for the AGM. Agenda and contact details for Zoom AGM will be issued in due course.

It is with regret but probably not a surprise that the upcoming Hot Toddy set for this coming weekend has been CANCELLED.

Event organiser Robert Gingles from East Antrim Boat Club has been in touch to firstly acknowldege and thank all those who responded to the request last week and expressed their interest in the event.

Robert has said the Club Committee have reluctantly decided that the event was not viable at this time.

The Class Committee will be meeting again shortly and will come back with decision on when the GP14 Ireland AGM will be held.

So we had an event.

From a personal point of view , a lot led up to it. Massive help and encouragement from all involved. Covid 19 protocols for visiting the club were outlined and everyone made a great effort to stick to them. We are incredibly lucky where we sail, we have a lot of land at our club, two slipways and a great beach to spread out along.

The sailing was,…stunning.
PRO, Joe Crilly, flew back from Australia no less,( he did his quarantine ) and with all his able assistants ran four races on Saturday, and just a single one on Sunday morning…..there was a lot of swimming on Sunday, and a lot of very good sailors leaving spinnakers tucked up in their bags. Much to the joy of those of us featherweights who threw them up and gained back, and more, all we had given away struggling up the beats.

Saturday was hard work, didn’t ask for windspeed measurement so don’t know what it was actually blowing but at a crew weight of 125 Kilos , the main was largely inverted, kicker full on, cunningham hard down, board kicked up, genoa cracked slightly ( any other suggestions…?) and we were struggling, but when you turned the corner…oh what fun !

Sunday there was more, the runs, and particularly the final reach home were just awesome.  The only thing that could have made it more perfect would be a house sized swell chasing you. The lake ain’t famous for that.

Standouts? blocked out at the favoured committee boat end in race one, James Hockley and Alan Thompson, a new pairing in a brand new Winder, circled, came through late , flipped onto port, held their breath and hitched into a great big righty. They were gone. Alan’s well used to them, but chalk up a first ever event race win for James….all that beer drinking with Sam Watson did no harm...
Ger and Melanie won three races, and the event, physically not a heavy crew…but so good…, they were also racing their new Winder for the first time, and both really happy to be out on the water competing .  Mels dad is our President , Curly Morris , and if you want a heavy air education, watch him march that boat up the beat.

The  other big win of the weekend was Ed Coyne crewed by Colman Grimes, Ed notched up his first event race win and also took the Youth title in the last year it was available to him. Ed and his sometime helm Adrian Lee stepped into the class from a club that they started themselves in their hometown (Youghal) as sixteen year olds and only a few years later are pushing to rule the national roost. Feckin’ brilliant.

Oh,and Norman Lee port tacks the fleet , the wily old dog was gone…  the big breeze meant the younger fitter crews  reeled him in but it was a spectacular sight, not allowed say how old he is ,but himself  and the RO raced GPs together back at the dawn of time when Curly was but a nipper.

Fleets wax and wane all over the world all the time. Right now we’ve got a good  crew coming together at our club. To all of you out there I can only say, get kids involved, get them to events , the improvement in their abilities after only a few events, has shone through for us as they race what is supposed to be a heavy old boat straight through the local pack of newer (faster?) dinghies. And the rest of the kids cop on and see the light.

To Howard Davies? you were a genius mate, that was money put to bloody good use.
It was great to be able to host the Youth Championships here in Blessington and get an opportunity to remember and honour one of our former Commodores, Peter Hannon. Peter was the man who encouraged the likes of myself and Simon Cully into GP14 here in Blessington when we were starting out and the Youth Championship trophy is named in his honour.

A big thank you to all who travelled to Blessington. We had Youths from Youghal, Blessington, Lough Foyle, Sutton and the Royal Irish. A particular thank you also to our Class President Curly Morris who raced all 5 races.

I really hope that somehow the rest of you (GP14 sailors everywhere) get back to doing what we just did. It was really good fun !

The NOR has been published below. Please also read the attached additional Covid-19 related conditions provided by Blessington Sailing Club

Registration can be completed by using this Blessington  link.
All those expecting to compete must Register above and also make contact  with Richard Street (contact details below) in advance of the event:

Skerries Sailing Club are hosting their regatta on the weekend of Aug 22nd & 23rd. They have invited GP14 Class to attend. Class members can attend for one or 2 days of the event. €25 covers both days or alternatively €20 for the GP14 OPEN Event on Sunday.

The 2 x  NOR have been published below.

Registration and Entry Forms can be completed at the Club but as an aid to helping the Club prepare for the event, they would appreciate if those intending to sail confirm with:

It is with regret that the SSC General Committee have after careful consideration made the decision to CANCEL the Skerries Regatta / GP14 Open set for Aug 22/23.

Decisions on the Sutton Dinghy Club Regatta (Sep 5) and our own Autumn Open & Youth Championships set for Blessington (Sep 12/13) will be made closer to the time. WE will keep you informed of any updates.

It is with regret that the Committee have had to CANCEL events up to the end of August 2020. At this stage we will NOT be rescheduling events. We remain hopeful that our September & October events will take place. (Aug 3rd 2020).

Both Skerries Sailing Club (Aug 22/23) and Sutton Dinghy Club (Sep 5) have plans to run their Club Regattas and have extended an open invite to the GP14 Class to attend. More details will be posted on the Clubs respective websites. 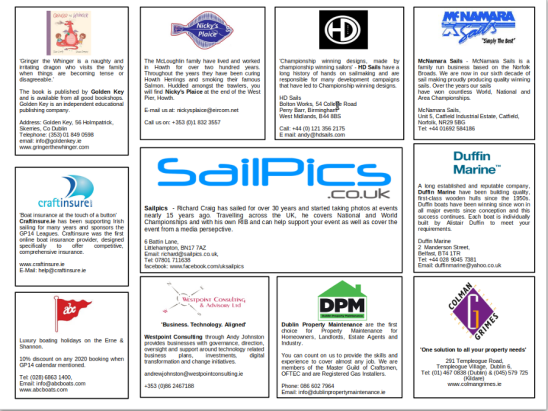 2020 Calendar Sponsors
The GP14 Ireland Class Association would like to recognise the support we receive from our sponsors. With our 2020 season disrupted we have unfortunately not had the opportunity to celebrate and promote our sponsors the way we normally would.

From the GP14 Ireland Committee we wish all our sponsors the very best in these difficult times and we look forward to continued engagement next season.

Following a review by Skerries Sailing Club, in conjunction with our national and international stakeholders, we have decided that, in light of the current pandemic and with the consideration of the safety and welfare of all who would be involved, to postpone the GP14 World Championships 2020, originally scheduled for July 25th to 31st this year. The new date is the last week in July 2021. More details will be available at a later time. 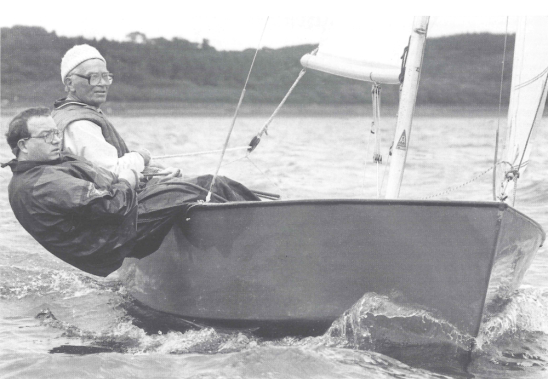 David Mawhinney - RIP
It is was with sadness that we heard recently of the passing of David Mawhinney. David was crew and son of well known GP14 stalwart Ernie Mawhinney. David passed away late in 2019. David is pictured with Ernie in Ventura (796) in 1995. The photo shows the pair preparing for the 1995 Championship of Ireland (Newtownabbey Boat Club) and was taken by Bob Torrens and featured in the 1995 Reflections magazine produced to mark the 40th anniversary of the Class. 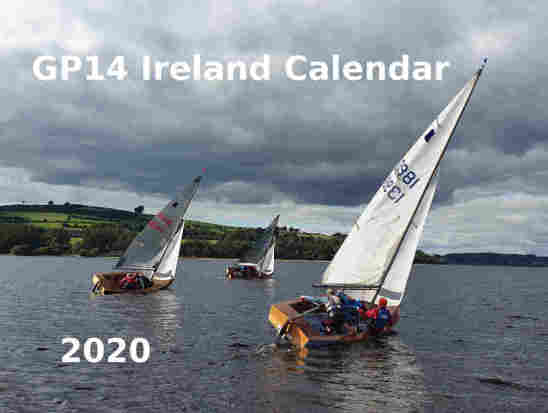